Rise and Grind: Challenges of a football widow

God and football, that’s what I was raised on in Texas. The only thing stronger than the lure of the lights on Friday Night was the alter call in church on Sunday morning. For me, church was always bookended with football. Coin tosses started the weekend and the Cowboys finished it. I became the devoted disciple of Roger Staubach, Tom Landry, and my next-door neighbor, a high school safety and hometown hero. For me, the two most beautiful sounds on this planet earth will always be the clash of helmets on the gridiron and a choir singing Amazing Grace.

Now being a football fan and being a football wife are two totally and completely opposite entities. I am still a fan, but I am also now a wife. Allow me to explain how that changes things… As of 7:45 yesterday morning, summertime ended. Mike started back to school, and I start tomorrow. (Ugh.) I am officially a football widow and my little lads have become football orphans. Again.

Every weekday from here on out, Mike will leave us around 6:30 AM and he’ll make it home just in time (if we’re lucky) to give the boys their warm milk and kisses for bed. And this will go on from here until — we sincerely hope— the middle of December and a state championship. This is our goal. This is our life. This is our truth. A half a year, folks. A half a year of mothering without Daddy. Of navigating housework and tantrums, mealtime and bath time — and sometimes even bedtime — without Daddy. Of cooking with tired, hangry kids hanging off my belt loops or clinging to my ankles as I navigate from fridge to oven, to sink, to stovetop (which is good, I guess, because it cuts back on my use of the dust mop). Of juggling soapy, slippery, uncooperative boys from tub to towel all by my lonesome. Of refereeing shoving matches and toddler torture while maintaining our laundry and my sanity.

But in a way, it feels brand new. This year, Mike is coaching with the Cartersville Purple Hurricanes, a winning program both on and off the field. The staff and players have made it a point to embrace not only Mike, but also the boys and me. There is tradition and there is family here. Lots of teams say that, but with the Canes, it’s not just lip service — they mean it.

Last year, I spent a very lonely season, just me and the boys, a stroller loaded with a pantry full of snacks, and a haunting suspicion that in the whole, grand scheme of things, no one on the staff besides Mike gave a damn about whether or not we were ok. I saw on my Facebook news feed this past week a story about a rental car employee who helped a mother of twins hold one of her sons while processing her paperwork. A simple gesture — most people wouldn’t even consider it newsworthy. But that mother of twins considered it monumental. Because, you see, when you are out by yourself in public with twin babies, every single thing you try to do feels impossibly dangerous. For example, the other night I took the boys to Ingles on my own. When we came out it was raining and there were cars pulling in and out from every direction. I was trying to keep the boys dry by shrugging an umbrella between my shoulder and ear while holding their hands and trying to open the van door… and then I had to keep one boy wedged against the wet van with my knee so that I knew he wasn’t running into traffic while I strapped his brother into his seat… Like I said, the tiniest tasks for most people become monumentally, impossibly dangerous for mothers of young twins. So last season, as the boys and I hunkered down in the far corner of an end zone because we couldn’t dare navigate stadium risers on our own, as we dodged band instruments and blazing-fast receivers in search of touchdown passes, we would’ve appreciated a small, simple gesture such as the one that rental car employee made. A gesture that family members wouldn’t hesitate to make — but on that team, there was no family.

This season, though, is already so very different. This season, there are potluck dinners in the field house after Friday Night games. There is connectivity and support amongst the wives – from a welcome note in the mail the first week, to season survival baskets, to group texts for reminders and updates. Oh, and just one more small, but significant item that completely seals the deal for me and shouts that we’re home. Every home game on Friday nights, under the glow of those stadium lights, in the midst of thousands of devout fans singing along, the band plays Amazing Grace. God and football. I’ve come full circle. My faith in family has been restored. 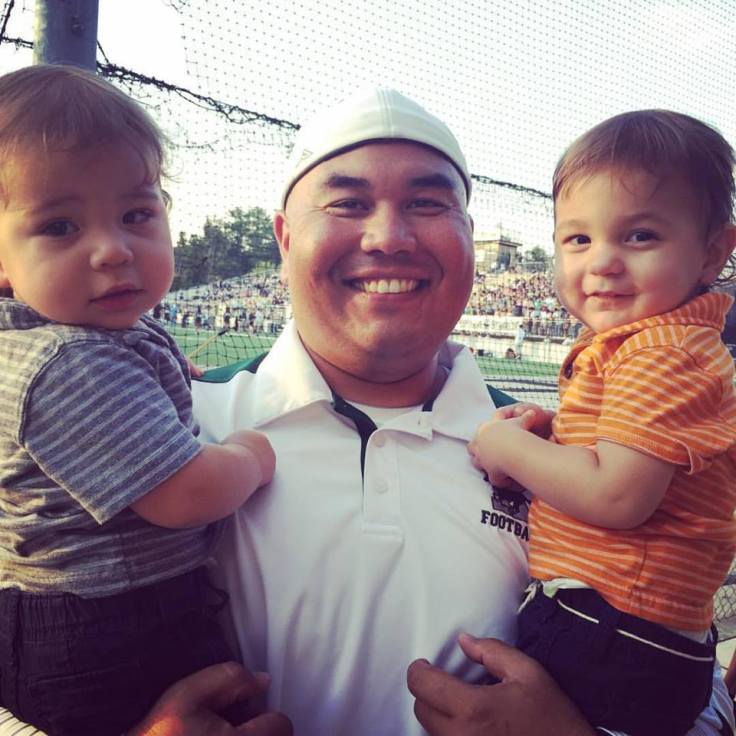 Because at Cartersville, they truly know and understand how the game can make or break not just the players and coaches, but wives and families, as well. You see, in football culture, there is something called The Grind. It has to do with owning and embracing the hard work and brutal sacrifice that football demands. It has to do with mental and physical toughness, with drive and desire and deep-seated commitment, with privilege and with pride. The Grind weeds out the unworthy. It leaves the weak in the dust. It is well understood that for any team to be successful, every single one of its members must embrace The Grind. Because what seems insurmountable as an individual is totally and completely attainable when you are an invested member of a team. And as wives, we signed up for The Grind too. We are fighting the good fight and we are giving our all. We surge with the highs and we batten down with the lows. We get the goose bumps, as well as the goose eggs — just like every other participant. Cartersville is the first and only program I’ve ever been a part of where the wives and families are truly acknowledged as being willing participants in The Grind. It’s more than nice to have a team acknowledge the wives as a part of it all – and not simply after it’s all been said and done at the tail end of a speech at the banquet (every football wife knows the line I’m talking about…).

So goodbye, summer and hello, fall. It’s time to Rise and Grind.

But before I sign off, I just want to make certain that all of you know how much I really, truly do still (and forevermore will) love the game — despite the hardships of the season. Because it’s the love of the game that keeps all football widows going. It’s the Friday Nights that sustain us, that feed our souls from week to week with glorious, sensuous bounty:

It’s the home crowd blazoned with team colors and spirit. It’s the flavors of fall — the boiled peanuts and corndogs, dill pickles and coffee. The blur of a perfectly passed ball from pocket to end zone. That delicious thump when the kicker hits the sweet spot and nails a 52 yard field goal. A flawless on-side kick and the ensuing chaos of the opposing team. The apple-crisp nights with the chant of the crowds in the air and a win on the books. That fluttering belly tickle I feel when I catch my guy’s wink as he heads to the coach’s box. And finally, the very best of the Friday Night feels – that proud, tight familiar swell of my heart when our own little guys storm the field with the rest of the team families after the game, running headlong into Daddy’s waiting arms. Now THAT makes this whole widow and orphan thing worth it. Time to Rise and Grind.