We are five days away from the Georgia Dome. It’s been a long and grueling journey. Football is a tough road. The season is a gauntlet of physical demands, mental challenges, and countless hours. The coaches and players have travelled so far and sacrificed so much. And believe me, so have the wives and families.

We’ve all suffered our fair share of battle wounds and none, more so, than this week – at least in terms of my own little, nuclear family. It’s as if the closer we get to our end game, the harder the trials and tribulations become.

The 2016 football season will close this week with a battle for that holiest grail of the high school gridiron: a state title. And here, in our household, where the energy should be humming and buzzing with promise and productivity, where we should be electrically charged with anticipation and drive — instead, we have suffered wave after wave of contagion and blight.

My boys and I savored the Cane’s semifinal win (nothing short of a storybook, come-from-behind victory) for exactly eight solid hours this weekend. Then Saturday morning dawned and the dark forces began their onslaught.

One of my favorite allegories is The Alchemist, by Paulo Coehlo. It’s a hero journey about a young shepherd boy in pursuit of treasure. It is my favorite, not for the plot, which becomes tedious and redundant at times, but for the message, which is profound and powerful. To reach your ultimate goal, the shepherd is told, you must dig deep. And be warned that the closer you get to your treasure, the tougher the dig becomes — the harder the ground, the harsher the conditions. There will be trials. There will be tribulations. But you must stay strong and dig on. The physical world will hurl shit your way in ever-increasing proportions. But trust in your dreams and trust in the universe. The harder things become, the closer you are to your goal.

So, here we are, days away from our goal, and suddenly the shit storms start raging.

First target: Parker.  He woke up with a whole slurry of what looked like clotted cream, curdling and gooping in his lashes. We wiped and dabbed and called the doc: Pink Eye. Getting antibiotic drops into a willful toddler boy’s eyes is perhaps as easy as getting to the state championship game. It can be done, but it requires teamwork, a constantly-changing game plan, and a solid line of defense. So that shit hit Saturday morning.

Then Tate decided to boycott sleep for the weekend. He writhed and whimpered and slapped at the bed with both feet for hours and hours on end while I rode out the storm next to him. Turns out he had an adverse reaction to prednisone, which he’d been taking for his wheezing chest. So that shit hit Saturday night.

Then, due to the frustration and helplessness of ailing twin toddlers and not nearly enough hands to deal with the deluge, Mike and I had ourselves a marital tiff, one of those stupid, husband-wife spats that is born of exhaustion and designed to wreak havoc. So that shit was Sunday.

Then, Monday brought with it a stomach virus that claimed Mike, hobbling his energy, and dimming, but not killing, his spirit. He pushed through to the other side, managing to make football practice with a thermos full of grape juice (according to one of his friends, a tried and true grandma remedy) and a boxful of Imodium tablets in his pocket. That shit – literal this time – hit yesterday.

And then, today. Today, the fates delivered the stomach bug to me. And I was not nearly as resilient as Mike.  It slung me sideways. Like, truly. I was prone in the bed – or on the bathroom floor—for thirteen straight hours. My head spun like a whirlwind and my innards parted like the red sea, heading opposite directions and leaving me completely drained. Literally. Mercifully, round about four o’clock, the wicked flux was lifted and I learned I would live. So that shit just happened.

Because the end is in sight and the treasure is near. We’re shoulder deep, and we just keep shoveling. 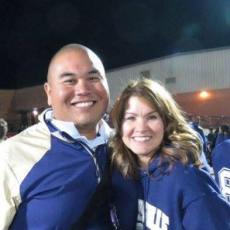