I just returned from a weekend get-a-way to Chicago. Me. Leaving twin toddler threenagers and a curmudgeonly dachshund with spiteful shit tendencies at home with my husband. What was I thinking?

I’ll tell you what I was thinking. I was thinking my sis and I hadn’t had a girls’ trip in over ten years. I was thinking I was in dire need of some breathing space, a massage therapist’s table, and a cocktail or two on a rooftop bar. 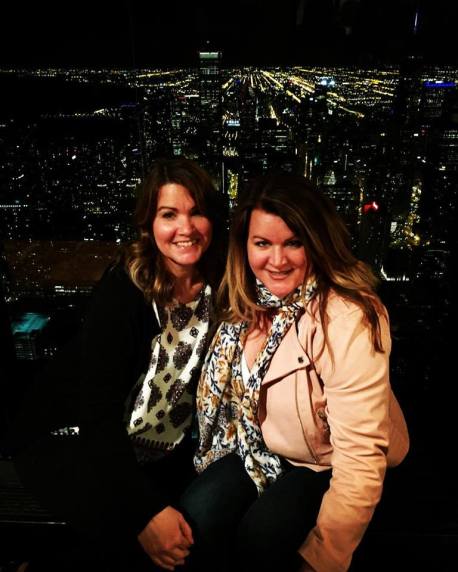 And I was thinking I was leaving my boys with their father. A father who is no rock star. Or bionic man. Or superhuman specimen. Although I tend to think so. Nope, he is a dad. But not JUST a dad – for there is no such thing. There are wonderful dads — capable, organized, efficient, loving co-parents. And there are terrible dads – disconnected, disinterested, uninspired biological sperm donors. And there are all those who dot the continuum from wonderful to terrible and back again. The same goes with moms. But my boys’ father – he sits at the very top end of that number line. He is a wonderfully capable, organized, efficient, and loving co-parent. So, guess what?

I had an absolute blast. I didn’t worry. I didn’t fret. I didn’t leave frozen meals in the fridge and emergency contacts on the counter. I didn’t call him every three minutes to make sure he knew not to forget sunscreen or to give them too many sweets or too much screen time. I knew that he had it all covered: the Friday school routine, the Saturday morning pancakes and the Sunday Frozen film fest. I knew he could sail smoothly — well, maybe not smoothly (there’s no smooth sailing with twin boys) — but he could at least sail confidently through all the random tantrums, dirty diapers, snotty noses, and snotty attitudes that our darling twosome could serve up. And they can certainly serve up a lot. But he had it. Asthma regimen – no problem. Bedtime and bath – no sweat. Stealthy wiener dog thievery and rapidly-scarfed-down happy meal nuggets – well, that may have ruffled his sails for a second, but still. He had it.

And like I said, I had a blast. My sis and I were ready to cut loose. We crammed as much into three days as humanly possible. The first night housed a gala – complete with hair and makeup and champagne on serving trays. And dancing. Lots and lots of dancing. 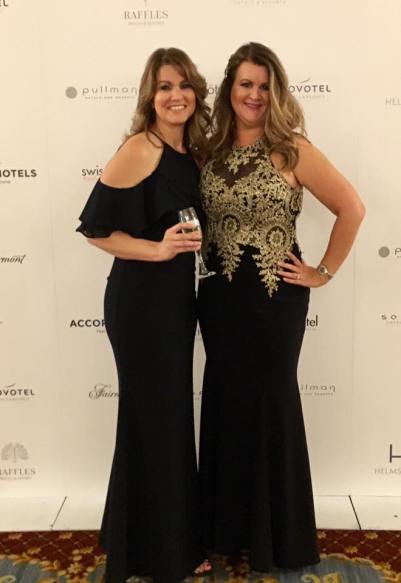 The next morning held a detoxification massage (not that we had any need for a detox). But let me take a small second to tell you about this massage. I’ve had rubdowns (not like my sister, mind you She’s had basically every make and model from Swedish to Shiatsu) but both of us would argue that no massage compares to this massage. It’s like being melted down and remolded out of myrtle and cypress and juniper berries.  It is seventh heaven on the eighth floor of the Four Seasons Chicago. Go there. Yesterday.

And speaking of the Four Seasons Chicago – they know how to pamper an exhausted twin mom/end-of-the-year schoolteacher and her kid sister who has her own special set of challenges and fatigues. We were spoiled senseless. We consumed flatbread sculptures, ate hand-rolled truffles, drank gingerbread tea, sipped three-olive martinis, slept on marshmallow mattresses and consumed room service before a window that reigns supreme o’er the Windy City. I can’t thank them enough for their hospitality.

Nor can I thank my sister enough. She is my mirror twin, separated by four years. We are opposites. I am quiet, she is… not. She brings light and laughter everywhere she goes. When she turns it up, the world dances to her energy. I tend to sit back in the shadows. I enjoy naps and home. But last weekend, she plugged me into her electrical current and we bathed in the bright lights of the big city. We took a river tour and learned about the history and skyline. We had guitar solos played for us at Buddy Guy’s. And we rubbed shoulders with giants – literally. The Celtics were staying at our hotel and we bumped into their seven-foot-tall frames and their family members at every turn. I am now rooting unabashedly for Boston in the post-season because of the cutest three-year-old daughter of Jay Crowder and his beautiful wife. They shared their enthusiasm for Disney and her daddy as we sipped our gingerbread tea.

And finally, I can’t thank my husband and boys enough.  They hung back here in the big city of Euharlee eating the unexceptional provisions of a middle-class pantry and the Big Arches drive thru, while I gallivanted around Chi-town consuming deep dish pizza and five-star cuisine. My fellas are the ones who truly spoil me rotten. They shower me with love, and with hugs and kisses, and with the occasional bodily fluids (different fluids from different fellas ;b), and their love outshines all the fine-dining and relaxing massages and super shiny skylines in the world. 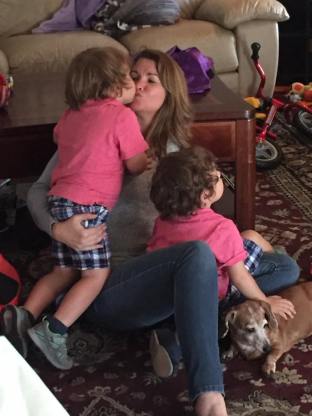 I thank them super very much a lot for loving me enough to let me leave them for a weekend. Especially to Mike. He handled everything with the dexterity and talent of a dad — a capable, organized, efficient, loving (and might I add, sarcastic — see above spa-parody pic) co-parent. And while the Four Seasons was leaving perfectly molded mints beside my meticulously fluffed and feathered guest bed, my dachshund was leaving perfectly pinched turds beneath Mike’s and my comfortably rumpled marriage bed. And yes, Mike handled that, too. I most humbly thank him for loving me enough to handle even that. He is way too good to me.