How to Potty Train Twin Boys (Lord, I Wish this Were an Instruction Manual) 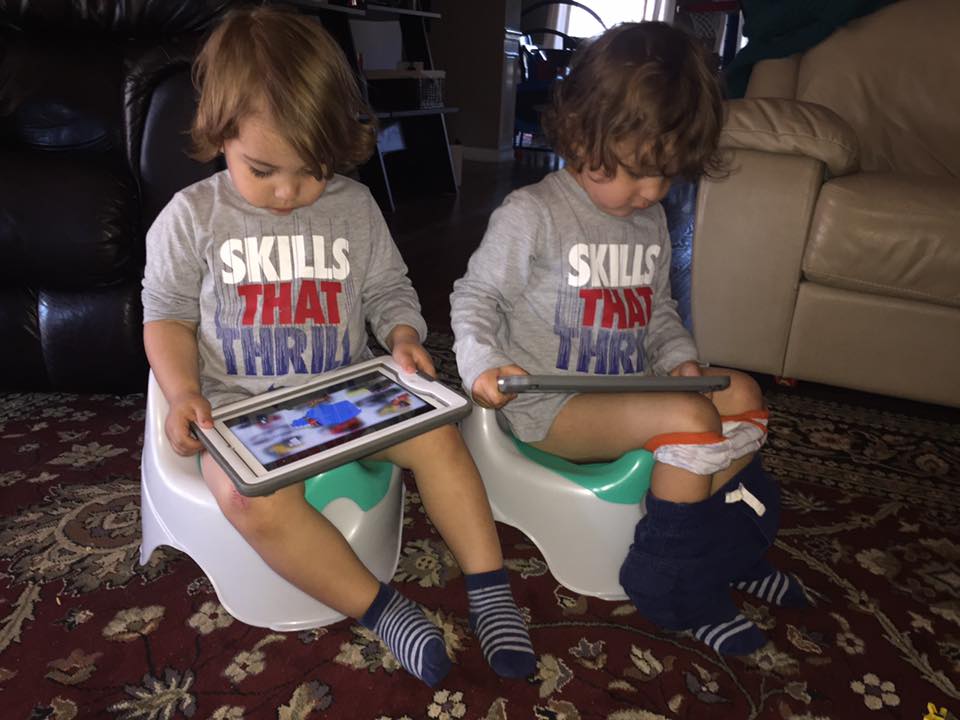 But it’s not. It is a desperation outlet for a mama at her wit’s end. It has been a long and arduous journey, with no clear ending in sight.

Here we are, over halfway through my teacher’s summer, and I am failing miserably at the one and only assignment on my mama to-do list (or maybe I should call it my to-doo doo list): potty training my three-year old boys.

Now I don’t want to mislead you. One boy is nearly there. He is currently wearing Captain America underpants sixteen hours a day with zero recorded accidents. (And that includes two twelve-hour road trips to Michigan and back with only two pitstops.) Why, then, you might ask, do I say “nearly there?” Because going number two is hardly a number one priority for Parker. He will hold his feces for days just to avoid the whole messy situation. And then, just when you think his intestines will perforate he quietly asks, with a sheepish twinkle in his eye, for a diaper. The potty is out of the question. It’s either a diaper or an impacted colon. Those are the options he gives us.

Why, you might ask, is he never afraid to liquidate his holdings, but is positively terrified to make a solid deposit? Your question is my question. He won’t say. Or at least, he can’t. He can’t vocalize his fear. And the experts claim it is unequivocally fear. Fear of losing a part of himself. Or of falling into the giant porcelain abyss. Or whatever other crazy cause they come up with. After all, nothing about a three-year old’s thought process is logical. I just know the minute we give him a diaper he goes over to a private corner and bears down like he’s birthing a boulder. And generally, after days of holding out, he is.

So with regard to potty training my twin boys, I’m half way there. Just below 50%, which in a teacher’s grade book is failing big time.

But if I look at it in terms of baseball statistics, our summer is going well. Like really, really well. So I prefer to look at it this way. They are my boys and this is summer, so what better analogy to use than one involving the boys of summer? In this scenario, I’m batting slightly less than .500 (taking into consideration the whole pee vs poo ratio for the one boy). And while I’m certainly no sports analyst, and the balls I know more about are the shape of inflated pig’s bladders and slung by a fellow wearing shoulder pads rather than round ones slung by a guy on a mound chewing tobacco (the guy, not the mound), I do know enough to know that batting .500 for an entire season is a damn-near impossible feat. But so is training twin boys. So I tell myself that. To feel better about our current situation. And our current situation is… Yeah, I don’t even know what to call it.

We are striking out at every turn with our youngest – the control-freak, OCD wunderkind who has mastered an entire repertoire of Disney soundtracks and the phonetic alphabet. But he hasn’t mastered this. And we’ve tried every potty-training life-hack known to momkind.

First, we bought colorful and appealing superhero undies. We oohed and ahhed over their comfort and built-in superpowers. He was unimpressed. We had his brother model them. He was equally unimpressed. We forced him into them. (Unimpressed is not the word to use here.) We figured his perfectionist nature wouldn’t allow him to have an accident. We were so wrong. All we got out of the endeavor was piddle stains on our Persian rugs and strained nerves on every last one of us.

We tried letting him watch the rest of us go potty. He actually loves this scenario. He laughs at the bubbles we make in the toilet basin, especially brother and daddy, who have distance and hose pressure on their side. But that’s all we get. Laughs. We get laughs.

We tried stripping him naked — because apparently that’s a tactic that works for some folks. Alas, not us. He lay in the floor for what felt like forever, writhing in hysteria and begging for his diaper and Santa PJs. (Yes, it’s July. Christmas in July is a thing. Don’t you watch the shopping networks?) And in all honesty, I’ve tried replacing them with a more seasonal option, but that’s going about as well as our potty training forays.

We tried peeing in the grass in the backyard (Well, Parker and Dad have. I abstained). Boys are supposed to love this. To see it as liberating — some sort of connection with Neanderthal roots maybe? I have no idea. Anyway, daddy and brother modeled the behavior. Tate was uninspired. 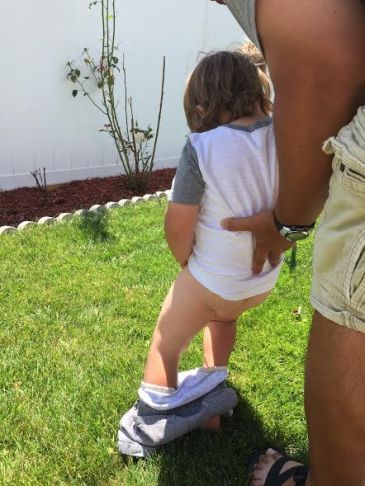 We would try positive reinforcement, but there’s been nothing to praise of yet.

We even lowered ourselves to the point of pitting brother against brother – thinking the whole competition factor would kick in. Nobody wants to be a loser, right? Yeah, that didn’t work. Tate happily praises Parker for his numerous successes, running to bring him his reward without even trying to sneak a Skittle for himself. So that pretty much tells me we are at a stalemate here, folks.

A stalemate of mammoth proportions. Our situation is so dire that Tate will no longer voluntarily climb into a bathtub out of fear of that natural urge that hits when a body meets warm water. Loss of bladder control has become his worst nightmare. (I pray he wasn’t irreparably scarred by the whole tinkling superhero fiasco.)

The situation is not healthy for any of us, and I really have no idea how to fix it. Like, at all. I’m at a total loss. I was lulled into a false sense of security after having the girls. They were successfully potty-trained before they were two. And of course, I’d always heard the rumors that boys are harder. And I’m here to tell you those aren’t rumors. Those are cold, hard case files from boy moms the world over. And I know I am generalizing here. I’ve heard tales of boys out there confidently flinging their diapers aside at 18 months, eager to pee like daddy, standing tall and showering the shrubs or bathroom tiles or family pets in willful abandon. But I am here to say I do not know any of them. There’s no evidentiary proof.

I figure I can look at my summer to-do list two ways. I’m either failing miserably, or I’m knocking it out of the park. As an eternal optimist, I’m going with the latter.

So in our household, my boys of summer are celebrating our season’s success with Skittles rewards for one guy and Disney tune showcases for the other. We are a team with diverse talents. And we are winning.