All Aboard the Potty Train!

We just sent both boys off to daycare in big boy undies. Both of them! One sporting Captain America because we haven’t found Iron Man briefs yet, (so to him they’re the next best thing), and the other guy in day-old, slightly used Superman ones because he has OCD tendencies (and that makes them the only thing. Please don’t judge me.)

Now in case you haven’t figured it out, it’s been ALL ABOARD the potty express this weekend in the Candela household. It’s proved a cruel and rickety ride– and I’m still not positive we’ve reached our destination, but we’re getting close.

This morning, we tossed the engineer’s cap to the boys’ long-suffering and sweet-natured day care instructors, along with additional supplies: some stickers, a couple of magic bracelets, and plenty of extra underwear, which I pray they won’t need because no matter how many channel locks and sleeper holds they employ, they will NOT be getting additional briefs on our youngest boy. Truth. I apologize in advance. We clearly owe their teachers some Martin’s chicken biscuits (for those of you not from around here, they are our breakfast equivalent of an In N Out burger. Although these women actually deserve a bottle of private-select, high-quality bourbon — but I believe that’s frowned upon by the State Department.)

Now I feel I need to clarify just a bit before proceeding further. Parker has been out of diapers for the entire summer. He’s been chugging along like a champ, except for one thing (um.. actually two — number two — to be exact). So that was our goal for him: to go number two in the toilet. Tate, on the other hand, has refused to get on board all summer long — like adamantly — so we knew it was going to be a wild ride.

The train rolled out at oh-eight-hundred Saturday morning, with a meticulously-plotted plan in place. We knew we needed strategies, tactical diversions, and lots and lots of patience. It commenced with the disposal of the one remaining unsoiled diaper. We made a great show of it, each boy grabbing a separate Velcro tag and marching it to the kitchen, where we threw away the last remaining vestige of their infancy. They laughed and laughed. And I may have shed a tiny – microscopic, really – tear. Diapers are a hassle and an expense. But they’re also the end of an era… But I digress.

The boys laughed and laughed. Until it wasn’t funny anymore. Until I pulled the wool from their eyes… ahem, diapers from their ass.

“Stand up, Bug. Let’s put on your new Spiderman underwear.”

“We don’t have anymore, remember? You’re a big boy.”

Tate may love spiders, but he does not love Spiderman underwear. What commenced was a tremendous thrashing about and flailing of limbs that left my extremities bruised and him bare assed in the floor howling at the inhumanity of it all.

The potty train had left the station. And then stalled immediately due to a tiny human lying prostrate on the track. For fifty-three minutes. Truth.

Parker, on the other hand, was all about it… until he had to poop.

“Mommy, get the diaper out of the garbage.”

“Not happening. It’s too messy. See?” I take him to the trashcan, where I had intentionally poured Mrs. Butterworth all over it, knowing full well that I would need the evidence to back me up later.

He tried a new tactic. “Let’s go to Target and get some more.”

“We can’t. Target is closed. It’s Saturday.” (Small white lie.) “Besides, we have this magic bracelet. (Big white lie) Let’s put it on instead and then go poo poo in the potty.”

Parker is the more easily manipulated of our two fellas, so his eyes instantly lit up. He proffered his arm and away he and daddy went.

At last! We were off and rolling! Until we weren’t. Another delay. Parker sat there, chugging away, but that sweet little engine just didn’t quite believe he could. Not even with his magic bracelet. So he didn’t.

Tate, meanwhile, finally got off the floor but refused to get into his tighty whities — which, truth be told, are a little loose for his small frame and actually multi-colored. For the remainder of the day, he rode the train naked and full steam ahead, pulling ferociously at his safety valve all the while. But he found success – and stickers on a chart each time.

But rather than using the cute, little, froggy urinal we purchased – complete with spinning tongue to inspire good aim – he used the bushes outside our front door.

As Saturday drew to a close the ride left all four of us completely pooped (although only two of us had actually done so), and with the soil in our front bed growing more acidic by the moment. The gardenias should love it.

Cue our Sunday morning departure. It was a good deal easier on all the passengers. Tate finally fed the frog and even managed to spin its tongue, although it might actually be a uvula… it looks kind of like a uvula. Regardless, he did it. (Although he still prefers the shrubbery.)

And Parker finally conquered number two atop the toilet – the magic bracelet managing to wield its powers — and got tatted up as a reward. And Mike and I actually began to relax a bit and enjoy the ride.

The frog and his ?uvula? 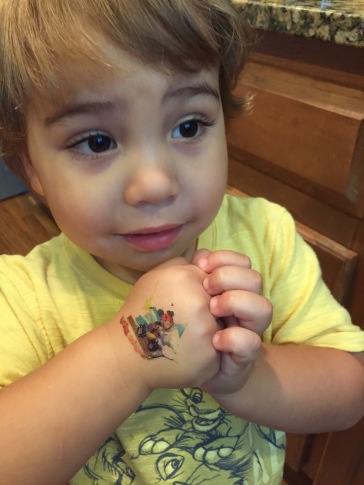 Yes, the potty express is finally proceeding full steam ahead. And I’m praying that having handed over the controls to our sons’ ever-faithful teachers, the forward motion will continue. I pray that the air brake isn’t somehow inadvertently tripped in the chaos of centers and snack time. I’m not worried about Parker. He’s pretty much got this. But Tate, he worries me a bit.

Earlier, when I mentioned his OCD, it wasn’t for dramatic effect. He has definite tendencies. Tate won’t do anything until he’s confident he can succeed. And once he’s mastered something, he does it, ad nauseam. We’ve recorded hours of him singing Elsa’s theme song. He’s completed his favorite ABC puzzle approximately two hundred thousand times. (I exaggerate. Let’s say one hundred. Thousand.) Last week I told you about the elevator that we rode over and over and over and over again on vacation. And when we weren’t riding it, he was talking about riding it. And begging to ride it. And screaming to ride it.

So I feel like it’s kind of the same with the potty express. He feels fairly confident right now. At least about the first part (we’re working toward no. 2). For a while over the weekend, he wanted to pee every three minutes – and his body wouldn’t necessarily comply — which caused him to stress a wee bit (yes, pun intended). But now, he’s relaxed into an every-thirty-minutes-or-so pattern. (We have a plethora of stickers to prove it.)

Our family boarded this train with the intent of promoting confidence and independence (and a new school level – age 3-4 class) for our little lads. And thus far, it is working. But if our youngest has a set back, his OCD tendencies may take over. He already worries nonstop about “pee peeing on the floor at school.” He gave me a running catalog of classmates who have done so in the past. And if he does, he’s sure to internalize it as failure and our entire train could derail.

So I would appreciate any and all prayers for a successful third day aboard the Potty Express. We could use all the assistance we can get. And please, please… send prayers, not judgment. I know they’re almost three-and-a-half. I know they should’ve been potty trained a long time ago. But twins are a lot of work, David. Have mercy!