Neci Noodle: Queen of my Heart and the Premeditated Poop 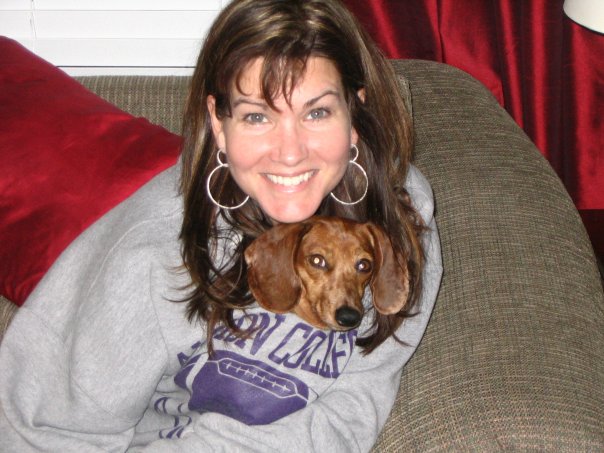 I have a dog. A smelly, aging, resting bitch of a wiener dog named Neci Noodle. And for those of you who have dachshunds, you know — you know the big personality that comes in that small sausage casing. They are loving and loyal, while at the same time, stubborn and independent – which is a polite way of saying they are tiny little temperamental shits. And this girl of mine, she is the wurst. (Sorry. Couldn’t help myself…)

Neci Noodle loves me with a heart the size of a dog twenty times her breed — let’s say, a bullmastiff – big and bold and without shame. And she is as fiercely protective as a bullmastiff would be, too – but with a distinct size disadvantage. Size doesn’t stop her, though. She’ll take on anything or anyone, big or small. And Mike qualifies as big.

I remember when he and I first started dating… Noodle was anything but a fan. It was three-hundred-pound Asian meathead vs twelve-pound German wiener dog. As far as she was concerned, he had no business cuddling up on the couch with me. That was HER territory — and she let it be known, baring her teeth, and squeezing in between us at every given opportunity.  Talk about a literal wiener block. (Again, couldn’t help myself.)

It took Noodle quite a long while to warm up to Mike. She showed her displeasure by regularly leaving him presents… leaving me presents… leaving anyone in her wake a host of moist and meaty presents smelling of deeply digested rage and rancor.

I want you to know I read somewhere online that it is impossible for a dog to be spiteful — that they just aren’t capable of that sort of emotional forethought. But you just can’t believe everything you read on the internet. Obviously, the author of such a ludicrous statement never owned a dachshund.

Now Neci Noodle, my impassioned and premeditated pooper, is getting a bit long-in-the-tooth – “tooth” being the operative word here, as she’s lost nearly all but one in the past few doggy years. We’ve found them in the bed sheets, the dog dish, between the couch cushions… As a result, her breath is noxious. There is a distinct thrill in dachshund kisses and an absolute agony in dachshund breath.

Along with the loss of her canine canines, she’s growing feeble and frail and has a failing bladder. She sleeps pressed between my shoulder blades nightly, and twice this month, I’ve woken up with soaked hair and bedclothes when her bladder gave out on her, much to her embarrassment. These weren’t spiteful piddles. These were accidental drownings, and she was deeply ashamed.

And along with the unreliable bladder, Neci has developed a cough that no amount of antibiotics can touch and she’s rapidly dropping weight. My doctor daughter says she’s cachectic. I don’t know exactly what that means… but believe me when I say she’s like a slinky dog stretched too taut and too far so that her ribcage is loose and circling her in saggy slices of too-big, too-sharp hoops. She seems to be collapsing into that giant, bony cavity.

The longevity of dachshunds is between twelve and fifteen. She is thirteen. I fear the worst for my little bratwurst.

I guess it’s because she’s more than a pet. I know, I know, this sounds just like every other person’s account of every other pet that is deeply loved.

But then, most times those people’s pets do extraordinary things that warrant such devotion — like save lives or provide service or catch frisbees or execute midair flips or roll over on command.

Neci Noodle? She hasn’t really done any of those things – although she has made OTHERS execute midair flips and rollovers by getting underfoot at every available opportunity. She’s nearly broken the necks of my mother, my mother-in-law, Mike and me, myself, and I on multiple occasions (usually in the kitchen where food is being prepared).

Her traits are far from desirable. She’s jealous, she’s catty, she barks too much, she spews sulfurous exhaust from both ends, and she goes spelunking through purses and suitcases for mints and chewing gum whenever some unsuspecting guest leaves one at nose level – perhaps in an attempt to irradicate her unsettling, malodorous funk.

But just thinking about losing her stinky-ass leaves me frozen. I am terrified to take her to the vet right now. I’m terrified of the news I might receive. I’m terrified to discover the cause of this congestion that won’t clear up after two rounds of antibiotics. All the worst possibilities run through my mind: tuberculosis, congestive heart failure, cancer.

We’ve been through a lot, my thirteen-year-old Noodle and I: a divorce (mine), a major back surgery (hers) a remarriage (ours — she finally took a liking to Mike) and a couple of twin boys (definitely ours).

I have to say that I was really worried when Mike and I had the boys. I’d always heard and read (again, don’t believe everything you read on the internet) that dachshunds are not very good with children – especially if they have never been around them. Neci was nine years old when the twins arrived — definitely not a spring schnitzel. And while I’m sure she was not amused by the writhing little purple runts stealing her humans’ attention, her maternal instincts kicked in the very first time one of them cried.

I’ve read that it is physically impossible to ignore a newborn’s cry – that it is designed by nature to scrape against your insides, leaving your heart shredded and aching to assist. And apparently this time what I read on the internet was actually true. Neci heard that persistent little caterwaul coming out of that persistent little kiddo and couldn’t turn her back. She approached — whimpered — retreated — approached again. Before we knew it, she had him by the diaper and was dragging him over to me with her teeth.

From that point forward, she designated herself eager and willing fairy dog mother. And she has never looked back. They are her babies, and even though they have long since outgrown her, she is always in their corner. And underfoot. And cranky. But always there.

The first time I almost lost her was seven years ago this April. The doorbell rang and when I went to answer it I saw Neci seal-crawling her way toward me. Her legs were useless. She was paralyzed from pretty much her shoulders down. Once we got her to the emergency vet clinic, we learned she’d ruptured several discs and that we had three options: do nothing and hope she improved, put her down, or have surgery.

I almost fainted. No lie. You see that sort of thing in the movies – someone gets bad news delivered and their knees buckle. Only this was real life and it was no lie. My knees buckled. I sat down so I wouldn’t fall down. I was hyperventilating. I couldn’t afford this surgery. It cost the equivalent of a small car. I could barely afford the payments on my own car…

Let me pull back for just a minute and give a quick history of the Dachshund breed. They were designed for burrowing deep underground to root out badgers and rats. And while this girl of mine has never wrangled a badger, she definitely wrangles hearts, burrowing in deep and staking her claim.

She got mine from the minute she climbed onto my shoulder as a pup of twelve-weeks, clinging there like the little fruit bat Stella Luna from the children’s book — ears back, eyes wide and swimming with love, willing me to pull her in and love her back. 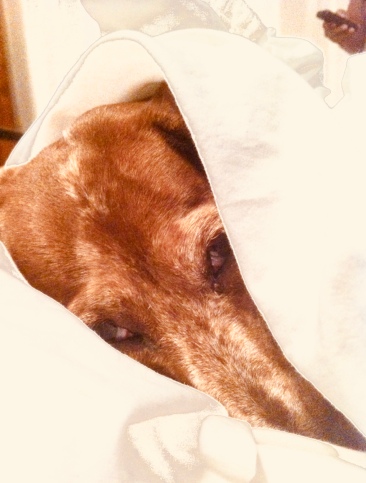 She’s a burrower, this girl of mine. And if I lose her, my heart will forever house a Noodle-nest of tunnels where she has staked her claim. I don’t think it will ever be the same.

Please say a little prayer for me and my girl — my smelly, spiteful, cantankerous, loyal and oh-so-lovable girl.