The Metaphysical Majesty and Miracle of Mother’s Love 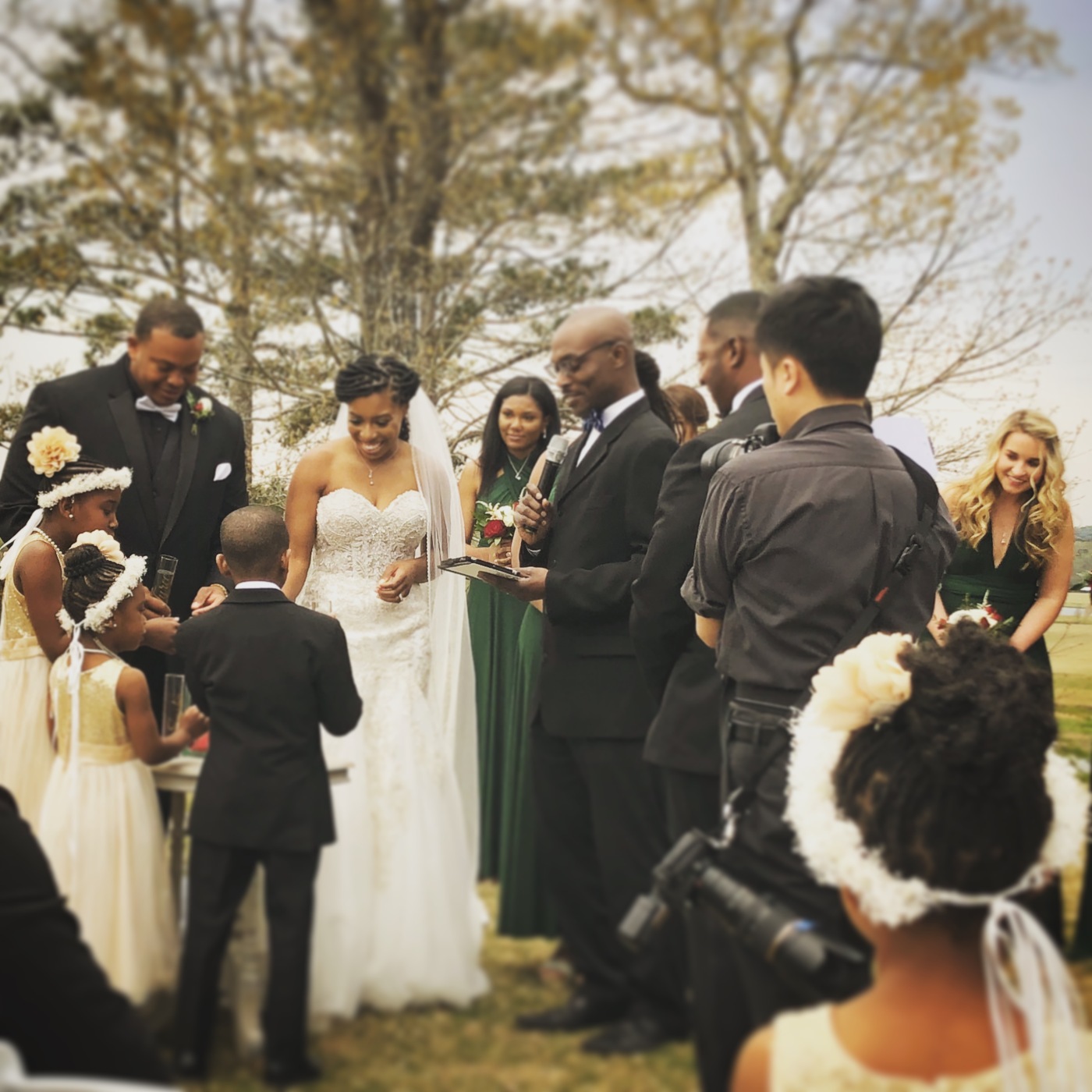 Last weekend, I attended a wedding full to overflowing with beauty and light and joy and love.

The ceremony was at the top of a rolling Georgia hill just west of Atlanta. Below us, a sweeping expanse of warm wheat fields and rough gravel drives. Above us, a decoupaged sky of chipped gray flakes and tissue paper clouds.  To the side, a small, serene lake. Behind and to the right, a riotous bank of hot pink azaleas. If they’d been gold – and sunflowers – I would’ve sworn we’d been painted into a Van Gogh landscape.

The wedding guests were a celebration of all ethnicities and ages, vocations, and persuasions. Smiles rode faces of chocolate and cream, honey and peach, almond, and espresso.

And so was our clothing.

We women wore bold patterns and vibrant hues, shoulders bare or swathed in netting or lace or even a random fur stole. Legs were hidden or revealed beneath hemlines full and frothy or sequined and straight.

The men sported less color, wearing standard suits and the occasional tux – save their ties of jewel-toned silk, glittering festively at their necks and chests.

We perched ourselves on the traditional white folding chairs of an outdoor wedding, beneath the swirling pewter sky, and waited for the procession to begin. But then the rain set in.

Rain on your wedding day is good luck — and as the forecast had called for no rain until way after midnight, this was a welcome harbinger, as far as I was concerned. It was only the first (and smallest of signs) that this was a marriage approved of in heaven.

Back in the lodge where the reception would take place — inside the room reserved for the bride and her attendants — Itoro was unphased. She was the calmest bride imaginable. No bridezilla, she. As a matter of fact, I’ve never seen her ruffled. Ever.

She’s a med-peds physician who handles life-and-death emergencies with deftness and aplomb. Her smile is sheer sunshine. Her skin is warm gingerbread. And this day was fused with her sweetness and light. A little rain could never dampen it or her spirits. Besides, she reasoned, there was a perfectly good indoor alternative not thirty feet away…

But just as we were prepared to switch locations, the showers ended, the harpist rolled out her harp, and my sister and I pointed our camera phones to the clouds, where a brilliant diamond solitaire had burned through the metallic skies.

It was spectacular. It was magical. And (Good Lord!), it was so, so much more than that! And although we wouldn’t know it for a few minutes more, we were pointing our cameras at the metaphysical majesty and miracle of love. We discovered just how phenomenal as I was fumbling with my iPhone, inspecting the picture for Instagram.

That’s when I noticed it — a spec gleaming just right of center on the groom’s side of the lawn. I looked up and glanced in that direction. Was there foil or metal or something else reflecting the light?

Nothing. Was it dust on my lens maybe?

I wiped the lens clean and turned to my sister, “Look at this,” I pointed. “Is there one in your picture?”

There was. Even rounder and more luminescent than the image I had captured.

“What is that?” we both said at once.

Before describing what exactly it was we saw, let me move back in time for just a moment… to a point nearly nine years ago when the bride was a senior at UGA and lost her mother to breast cancer. They had been close. Closer than close. As you can imagine, it was a time of heartbreak, a time of tremendous difficulty. Yet, Itoro persevered.

Her mother had a doctorate in social work, and she became Itoro’s spiritual mentor. She inherited her desire to serve others, to touch their hearts and souls with wisdom and tenderness.

Itoro talked about that period of loss during her reception toast. She testified how God has never forsaken her, even in her darkest days. There, in her time of need, she explained, God sent her a series of mothers – not to replace her own (that could never happen), but to bring love and help soothe the empty ache she felt inside. She called the names of seven women in attendance, my sister and I among them, and asked us to stand.

I’m here to tell you — I may have cried. You know the kind of cry – the surprised, nose-clasped-in-your-hands, jaw-quivering type of cry. Itoro couldn’t have blessed me more. There’s no way.  And it was then I understood the magnitude of what Jo Jo and I had seen. And why.

I have uploaded the image because you all need to see this to believe it. And even then, I will have Naysayers and Doubting Thomases.  But, please — Believe. 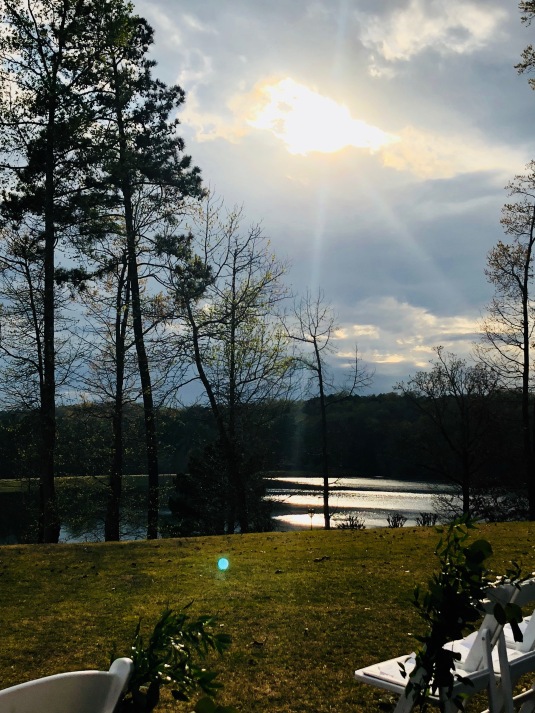 Take a look at the beams of God-Love spilling out of the clouds and bathing the ceremony site in blessings. Note the light pooling on the surface of the lake. Note the shafts and pillars of peace flaring from the newly-parted heavens. See the glory of the fuzzy, new growth backlit on the lanky trees. And finally, there to the left of center in the mossy-brown nap of the lawn, note the orb. The shimmering, blue-green roundness of an angel orb. The metaphysical majesty and miracle of love. And not just any love. Maternal Love.

Don’t be ridiculous, you say. It is nothing more than burnished dust, pollen caught in sunlight, a spec on the lens.

And I say, look again. And hear me. That spec of dust on my lens, as you call it, is on TWO separate photos taken from TWO different cameras in TWO different locations taken at the exact same time. And those two different cameras were being held by two different women — women who love Itoro like one of their own. And I believe that her mother knows and understands our love for her daughter. And that is why she showed herself to us.

That is no dust spec. That is Itoro’s mother — arriving just in time for the ceremony to commence.

I explained that Jo Jo and I didn’t understand just how spectacular a phenomenon we had captured on camera until later, and that is quite true. We knew and understood at once what we had in our pics. But it wasn’t until I showed my husband and he suggested I scroll my Live Photo back to see for sure if what we were seeing was something more than simply refracted light that we truly understood.

And so, I did — but not until our drive home from the wedding. It was then that I opened my photos and revisited the shot.

And there, in the enclosed cabin of a Ford F150, as the forecasted rain finally had its way with us, tapping on the rooftop and the hood, that we finally witnessed the metaphysical majesty of maternal love in flight. She floats – and at times, jets – from the celestial window there in the clouds. We watch her hover, taking stock of the surroundings, the wedding guests, the rugged cross at the altar where her daughter will soon marry her love. And then we watch as she takes her rightful place as Mother of the Bride, settling on the top rung of the first chair of the first row of the bride’s side of the ceremony.

Behold, the metaphysical majesty of maternal love. I have uploaded the video — on a loop. Watch it over and over and over again. May this beautiful angel orb visiting her daughter on her Big Day bless you as much as it has blessed us.