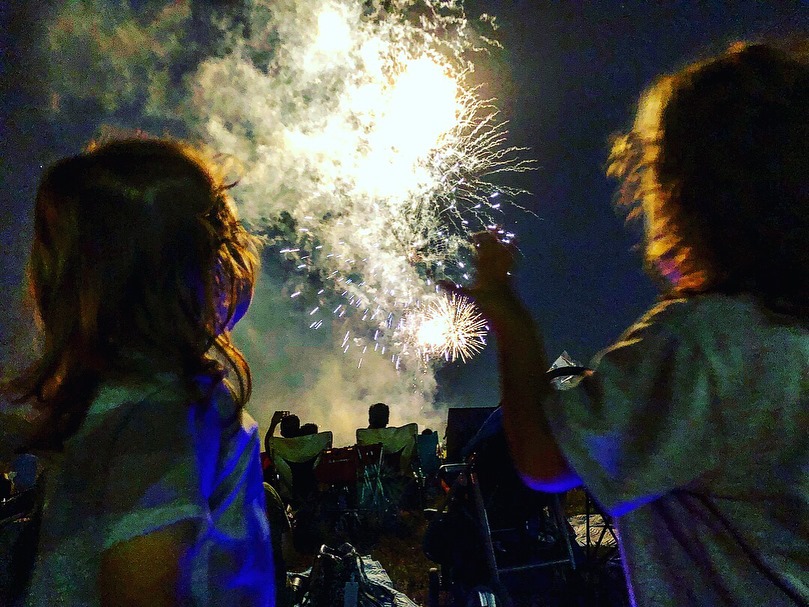 I’m not one of those people who loves a road trip – especially not a twelve-hour (without stops) one with four-year-olds. Twins. Twin sons. With more energy than all the suns in all the galaxies in all the universes.

Give me a plane and a peanut snack. That’s my preference… but we can’t afford four airline tickets. So drive, we must.

And this past week, my three fellas and I packed up the minivan and headed west. West to Dallas. To the Big D.  And we did it up big. As in #DallasBIG (Is that still a thing? It was three years ago, when the boys were 8 months. They are much bigger now…)

We’ve made the trek a lot. The first time out, we flew — because they could fly free then.) But the first time we DROVE it, they were 18-months — and it took us just over 23 hours to get home. That was most definitely not a good time.

Our guys don’t sleep on the road – not then, and not now. Ok, maybe I lied just a bit. They have been known, on occasion, to take a thirty minute power nap…

So why in the world do we do it, you ask? Because their big sister lives and operates there. Literally. She’s a surgeon. So drive, we do. Every year.

This trip, however, was the first time it actually felt like a vacation. Because the boys are finally old enough to handle disruptions to naps and nightly schedules without major repercussions to every last one of us.

We pulled into the asphalt and glass metropolis on July 3rd, our minivan registering 109 degrees outside. That’s hot, y’all — even for Dallas standards.

We unloaded and headed out to explore, our first stop being quirky Deep Ellum — a district of warehouses converted to jazz clubs, dive bars, and tattoo parlors. We specifically went there to eat at a burger joint called Angry Dog and to find the giant American Flag mural nestled between side streets. (Which we did.)

… along with a myriad of additional murals and a very eclectic crowd. Deep Ellum is fun and feisty and definitely not G-rated after sundown. Get there early and then leave. We did. 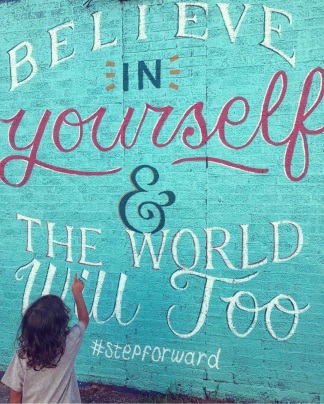 The Fourth of July dawned bright and hot. Big Hot. #DallasBIG. So we spent a large part of it in Caitlin’s pool, pretending to be mermaids and sharks — before reenactingThe Napping House children’s book by Audrey Wood.

Afterwards, we headed to Plano for fireworks. (We had missed the Dallas ones on the third, opting to go to bed at 9:30 instead. It had been a long road trip, despite breaking it into two days.)

Turns out, Plano was the perfect place to watch fireworks.  We sat atop a sweeping hill – a natural amphitheater – amid amber waves of prairie grass and multicultural waves of people. It was refreshing to see so many ethnicities atop quilts and soccer chairs under our star-spangled sky. It was as it should be. 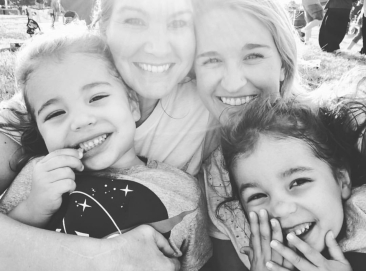 On Thursday, we headed downtown in search of a shady playground so the boys could romp in relative safety from the heat. A friendly city employee took a break from his sweaty work of cleaning up the flotsam and jetsam of Fourth celebrations to direct us to Klyde Warren Park.

Talk about perfect and free and fun! There was a giant geometric jungle gym, a merry-go-round, and a tree house! But the biggest hit was the children’s water garden, complete with dancing fountains, wade pool, and winding river. The boys climbed and splashed for an hour-and-a-half (in shorts, not suits — we weren’t prepared) before heading to lunch. 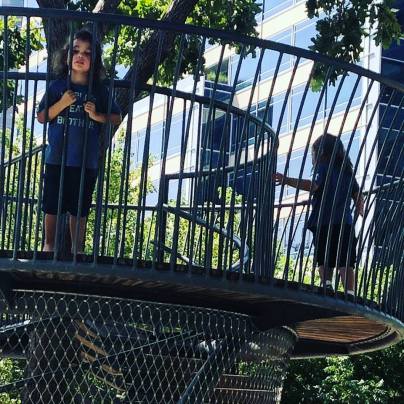 And speaking of lunch, not a hundred feet from the children’s park is a food truck line up — an end-to-end smorgasbord of fusion and classic fare – if you’re into that sort of thing. Which we are.

On Friday, another hot one (“like seven inches from the midday sun”), we took the boys to the Dallas Zoo. Luckily there were misting stations and shade trees everywhere. The zoo knows how to keep its visitors semi-comfortable. And how squeeze every last dime from its patrons.

For example… there’s a carousel smack in the center of the entranceway. Your kids are gonna see it. And they’re gonna wanna ride it. At two bucks a head. And you get motion sickness just turning yours. And they’re too young to ride on their own. Awesome.

Still, it’s a good zoo, with several animals Zoo Atlanta doesn’t have, including penguins and cheetahs and bald eagles and hippos. (Alas, we never saw the hippos because the Dallas Zoo is HUGE. And did I mention HOT? But we did get a nice view of the cheetah.)

We also got up close and personal with some lions, thanks again to brilliant zoo marketing. The lions take their morning siesta in the shade of a giant picture window only accessible through the air-conditioned rapture and deep-fried bait of a restaurant called the Serengeti Grill. (Did I mention, Dallas is really good at marketing?) We escaped the certain fate of an $82 lunch tab by promising ice cream from the stand just outside.

Friday night, we met up with a friend of Caitlin’s at a place called Chicken Scratch. It. Was. Awesome. With plenty of sheet-metal siding, picket fences, and weedy raised gardens to make a small-town, southern girl feel right at home.

But when you order the Coconut Waffles and Chicken you realize you’re not in Kingston anymore. Holy died and gone to heaven, Batman! The syrup had some kick (Dallas is nothing if not HOT), and the chicken had some bliss, and by golly, I was in love.

And so were our boys. What kid doesn’t love chicken tenders? But then, Chicken Scratch is so kid-friendly in other ways, too. All the tables are moored in gravel and our boys loved bulldozing their palms through it. (One family I saw brought beach pails and sand shovels. Genius!) And tucked into a back corner, there was even an old-fashioned playground with monkey bars, chicken crates, and half-buried tires.

Our boys were filthy when we left, but they were also incredibly happy.

Our final stop before heading home was The Perot Museum, an architectural marvel with dinosaur and space exhibits, among others (eleven total). It was a great way to beat the heat. 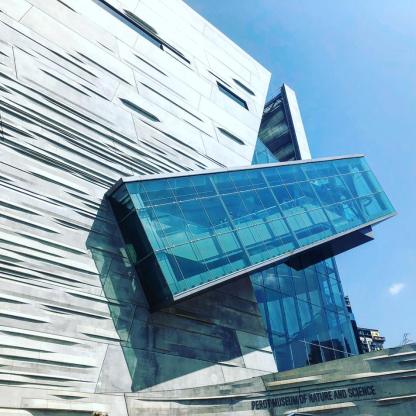 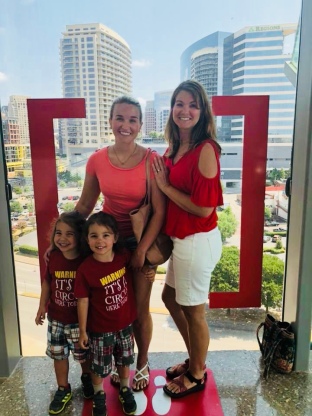 They had a great time with the interactive displays. In one, they made dinosaurs dance by moving their own bodies (sort of like Nintendo’s Just Dance, but with a T-Rex), and in another, they flew like eagles (same sort of technology.).

But our youngest twin’s favorite activity was riding the elevators (he’s obsessed — truly), and playing in the sand box in the downstairs children’s exhibit. Our oldest liked working the conveyor belt pulley and “driving” the stationary truck in the same children’s exhibit. (If you visit and have young kids, make sure you do the children’s exhibit last. One mother was openly lamenting her decision to enter the museum at that location. Her kid didn’t want to see anything else.

The tickets to the Perot Museum weren’t cheap, and it was very crowded (on a Saturday the week of the Fourth, what did we expect?), but it was loads of fun. Heading out, the boys begged to stay and keep playing in the outdoor music station.

We had a great time in Dallas. We did a whole lot in our five days – way more than we’ve ever done in the past — plus, I got to see my girl. That always makes the drive worth it, whether the boys nap or not. Or the drive takes takes twenty-three-and-a-half hours or sixteen with stops.

I’m actually kind of looking forward to what we can find and do on our next trip out. (Shh. Don’t tell Mike.)