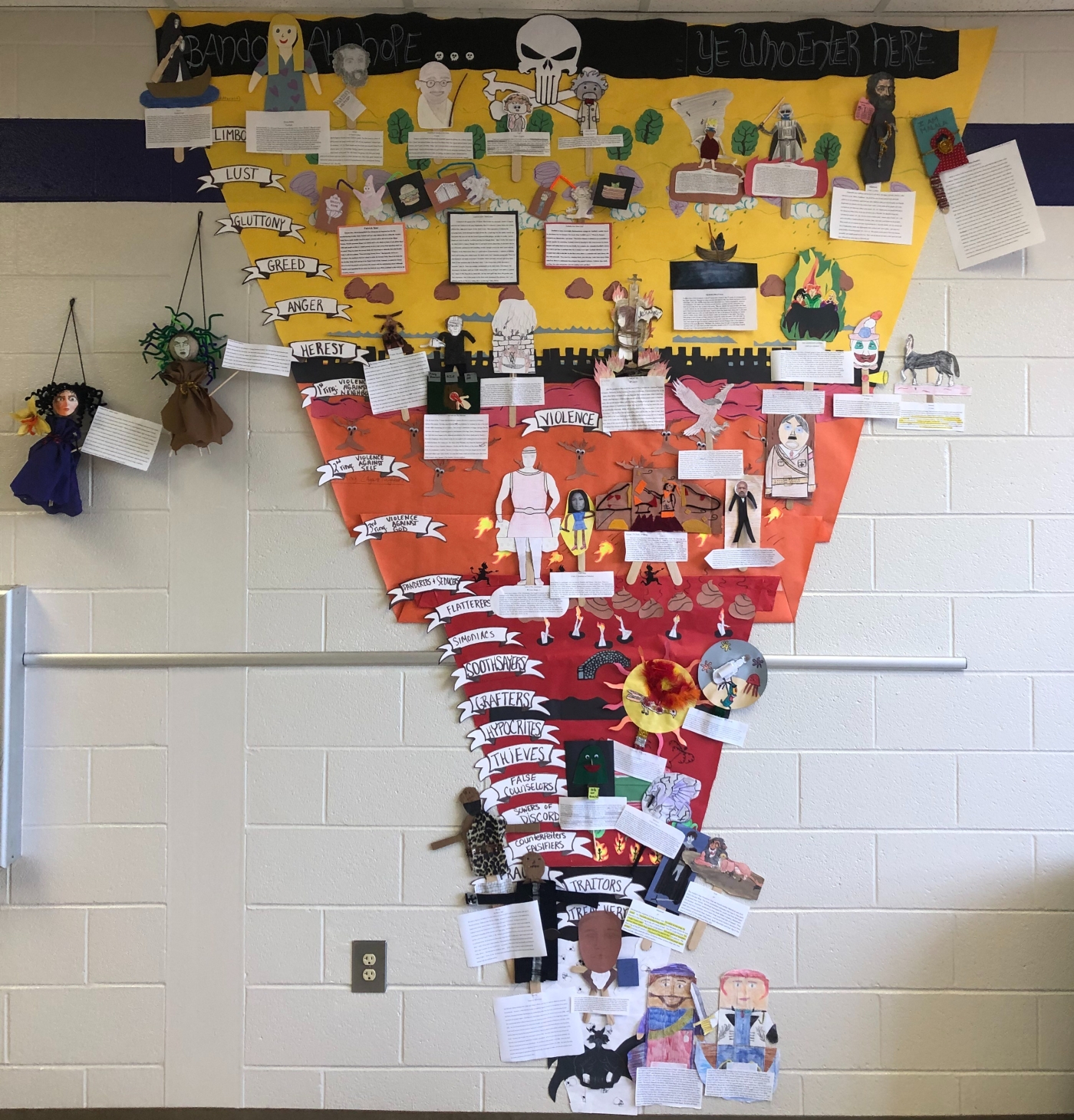 While teaching Dante to my honors sophomores, I can’t help but reflect on the parallels between his epic journey and the year 2020.

We should’ve known when we lost Kobe that this year did not bode well. Then March happened. And schools took a “two week break” to flatten the curve, and there was no turning back.

Two weeks trying to flatten the curve turned into two months, then two seasons, and now three. It seems there’s no flattening this curve. The bell swells bigger and bigger — but in reverse — as down we go, sagging lower and lower into this hell curve.

We’ve been plunged into Covid’s Inferno. A continuous downward spiral. Concentric circles of darkness and despair.

My students are suffering. My fellow teachers. My family. Me. We’re all suffering. Schedules and structure have been harrowed, relationships strained, connectivity disrupted, disjointed, destroyed. Time lost. Joy lost. Lives lost. Adolescent angst is at an all time high. Adult spirits are at an all-time low.

For a brief while — at the end of September — things finally seemed to be looking up. Turns out, we were just climbing one of the rocky walls that separate some of the more wretched ditches of the depths of hell.

Things began crumbling beneath us again. We rode a rockslide of new outbreaks, new quarantines, huge empty sections of classes as students became At-Home-Learners — a new, benign term for a much-maligned state in this 2020 school year. So… we went on hybrid again.

There are lots of hybrid creatures in Dante’s version of hell, half human, half beast. And now there are hybrid schedules in our version. Half our students here for half a week while the other half are at home, then switch.

The hybrid schedule is likewise half beast. Students really struggle with it. Still, at least kids are meeting with teachers in person. At least we can see their faces — half of them, anyway. Half-faced students, all foreheads and eyes, the rest hidden beneath masks.

Some say eyes are the windows to the soul. If that’s true, these kids still feel hopeless, despite our best efforts. Lost in a hell swamp. Drowning in an abyss of strangeness, angst, and isolation. And we are too… we teachers are drowning too.

We’re all fighting so hard. To stay afloat. To stay positive. To do good work. But we’re exhausted. It‘s an exhaustion like we’ve never known before.

And now, watching the news and seeing the headlines, the pictures — the miles and miles of cars waiting for COVID tests outside Dodger stadium, the pop up morgues constructed in El Paso, the renewed lockdowns in New York City — I feel like we’re waiting for a tidal wave to hit us and we’re armed with nothing more than a mask for safe passage across the swirling torrents of infection. Masks and wishful thinking.

…and so often kids let the masks slide down their noses and mouths while talking to each other and to me, sending droplets circulating into 2nd circle whirlwinds waiting to sweep us all up in their contagion. Droplets poised like microscopic 7th circle centaurs, arrows pointed at our chests.

It’s hard to guard ourselves from infection. If we haven’t been impacted physically, we’ve been impacted emotionally. Our hearts are feeling defeated. Covid has threatened every piece of refuge we have — school, home, church, and now, in this season, holiday gatherings. It threatens our every peace, this snapping, vicious multi-headed beast.

We’re in the ninth month of this journey. Surely we’re nearly done. I want so desperately to believe it… that Satan’s about to show his ass one final time so we can crawl down the hairy hank and emerge from this Hell hole of a year and into the shining light again.

I don’t know when it will be over, but I know it will. One day, good Lord willing –and hopefully soon — we will emerge, better for the journey. Wiser. More compassionate and understanding and thankful.