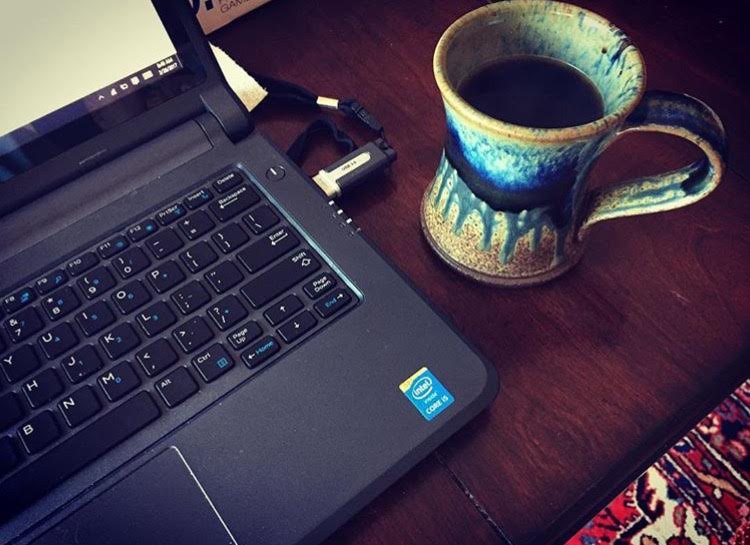 Inevitably when I write about something hard – whether it’s the death of innocent children or the dearth of wisdom in the White House – someone disagrees. Someone challenges my voice.

And I know that’s the nature of communication. People will inevitably disagree with you. And they have that right. That doesn’t mean I still don’t have the right to explore my thoughts and opinions and to voice them.

I write this blog for myself. It is therapeutic. It is cathartic and healthy. It is a way for me to use my voice. Because there was a time – for a very long time, actually — when my voice was silent. It was too squashed and maimed to be used.

It took a long time to build up my vocal chords, so to speak. So much so, that now, when I say something that I feel is important and needs to be said – and it strikes chords or nerves in others — I don’t know how to react; how to respond. If it is acknowledgement, I feel embarrassment. I was taught to be a wallflower. To blend into the background.

And if it is a challenge, I shut down. My brain immediately crackles and hums with the static and white noise of learned ignorance. I was taught that my thoughts weren’t thoughts. They were emotions. I was a hormone-fueled woman driven by emotions; I was unbalanced. And because of that unbalance, I should just still and look pretty. Don’t stand up, don’t speak out, I was warned.

Senator Elizabeth Warren was famously silenced on the Senate floor this year. At her workplace, where she rolls up her sleeves with nineteen other women and eighty men who were elected to ensure that all of America’s diverse voices are heard. Ironic, don’t you think?

But Senator Warren doesn’t play nice when the patriarchy puffs its chest. She has fight in her. She breathes fire. And if they try to snuff it out, she just flares up somewhere else. So when they silenced her on the Senate floor, she took it outside. (Isn’t that what men do when they get pissed and want to fight? They take it outside? Isn’t that the euphemism?) Well, Elizabeth Warren got pissed, was determined to fight, and took it outside. She fought the establishment. She fought the patriarchy. Even when she was warned (as the majority leader so infamously stated), nevertheless, she persisted.

Today is my one year blogging anniversary and I, likewise, will persist. This blog helps me. It helps me process my opinions into words on a page. Words that help me stay the course and press forward. Words that help me work through my overwhelming feelings of inadequacy. And as I write out those words I edit and edit and edit. I am as careful and calculated as a baker.  I sift and weigh and measure and adjust – until I’m confident that what I’m saying is what I truly want to say. What I truly believe. And that it is as palatable as I can possibly make it – even though I know it’s not going to suit everybody’s taste.

Now I won’t lie and say that it doesn’t bother me when someone criticizes. Nor will I say that it doesn’t feel good when people approve. It feels nice to have my opinions acknowledged. my passions and feelings accepted. (Yes, I voice those, too – because I have learned emotions do not make me a weak, hormonally-imbalanced woman; my emotions do not invalidate my opinions). But I do not blog for the “likes” or the comments, or to try to “go viral.” If that were the case, I would be failing miserably because I am a far cry from viral, let me tell you. I have no cult following – or really much of any following. But none of that matters to me.

What matters is that I have a voice. And I have the right for that voice to be heard. And I do my utmost not to offend people. I really do. (Remember that baker’s analogy?) I have been rash at times, though. I admit it. Particularly in the days following the election. Several of those blogs may have cost me a friendship or two. And I wish that were not the case.

But that still won’t change how I think, and why I think, and the fact that, yes — in spite of all attempts to program me otherwise — I think. And believe me, I think long and hard about what I’m going to say on my blog. Because voice is powerful stuff. We all know the pen is mightier than the sword. So I try really hard not to wound.

There’s a poem by Eavan Boland I love called, “It’s a Woman’s World.” It fights female stereotypes in many clever and determined ways. And it argues that “as far as history goes, [women] were never on the scene of the crime.” We’ve never held the sword. As a result, “no page scores the low music of our outrage.” Boland goes on to argue, however, that despite the attempts to conquer and control our tongues, we women are fire-eaters. Our mouths are burning plumes, and we will be heard.

Elizabeth Warren is certainly a fire eater, a flame thrower. She knows the fight will be hard. She admits “there’s going to be a lot that we will lose. But I guarantee, the one thing we will not lose, we will not lose our voices.”

I believe we all have been given gifts from God, gifts we are programmed from the depths of our genetic markers to use, regardless of our upbringings and hardships. I believe mine is my voice. And although mine is not necessarily an audible one, it is a voice meant to be heard. And I will project it through written word.

I will not lose my voice ever again.